More music tech goodness to chew on folks! I decided to make a short film showing the integration of a bunch of new things, Logic Pro X, the iPad Air plus the Native Instruments Maschine Studio running the V2.0 software. They play really well together!

I have made no attempt to hide my distaste of the music software Logic in the past, perhaps because I am a long time Cubase user it is ingrained in me but also I just think that for years it has really lagged behind other DAW’s too. Well, I have changed my mind, slightly! I had to buy Logic due to a collaboration with an artist I am working with. It just made sense to do this rathe than both of us lose time with trying to convert the projects back and forth between our systems. Besides this artist, there is another that I will be working with soon who is also on Logic X too. I had previously bought (against my wishes!) Logic 9 which I hated with a passion so I wasn’t too thrilled at the prospect of spending more time in Logic land. We’ll I need not of worried too much as Logic X is a huge improvement over its predecessor. The much needed facelift has finally banished those tiny menus and the relocation of things like the transport bar to the top has made the workflow more intuitive. Track stacks bring a Reaper like function when you group a bunch of tracks into a folder, that folder gains a dedicated fader – are you listening Cubase? There is now a bass amp emulation called Bass Amp Designer and low and behold when I first instantiated (correct term!) the plug in I was faced with a graphical reproduction of my classic old bass amp a Mesa boogie 400+ and my old cab too, the quirky 1516. I have never seen these emulated before and I was really impressed with how it sounded. There is the much talked about Drummer plug in which lets you choose drummer by personality (?) and also you now have a basic Melodyne like functionality called Flex pitch which I have yet to try amongst countless other improvements. 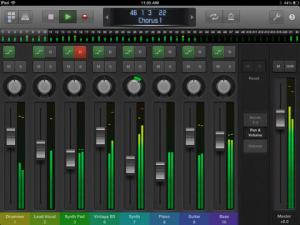 The show stopper for me though is the clever Logic Remote app for iPad. Borrowing heavily from the iPad version of GarageBand, this controller allows you to mix, edit and perform using a very intuitive control surface. Interestingly they have taken the Smart instruments idea and made them in to controllers for the Logic instruments. I marvelled at the design of these a few years back when they debuted on the iPad GarageBand so they are welcome here. These essentially let you turn the iPad into various types of midi controller, a guitar simulator, drum pads and chord strips on top of a regular piano keyboard that can also have notes stripped away to display only in key notes. Cleverly these follow whatever the region’s key is which is set in the main info panel at the top of Logic X. I have been banging on for nearly a year now about the wonderful chord track in Cubase, well Logic gets a halfway house now with the arrangement track combined with being able to set keys for regions. In practice I have found the Logic Remote to be the most robust and reliable of all the different iPad based control surfaces I have tried. Probably to do with some secret voodoo that Apple have going on that is closed to all and sundry however it works very well and maintains connection quickly after bringing the iPad out of sleep. This was the killer in the past for other controllers as it would often mean that you would have to jump through a few hoops to get things synchronised again. One feature I particularly like (which the Cubase Equivalent, IC also has) is the ability to create shortcuts and macros and give them dedicated buttons.

You may have read my Maschine Studio and software review or saw my Sonic State review. If not you can find them here so I won’t go over old ground as to what it is needless to say though that you can run Maschine software as an Audio Unit (AU) within Logic X. The cool thing with doing this is that the Smart Instrument controllers operate on the Maschine too via Logic’s own routing. I didn’t have to set anything up, they just worked. This is very cool as it allows for Ableton Live Push like functionality which was left out of Maschine v2.0. This means you can use the aforementioned preset scales on the sounds within Maschine. I try and demonstrate this in my video so I recommend watching that to see it in practice although the tune I make is quite meh!