This year I was fortunate to perform a world tour with Karl Hyde, front man of Underworld.

Karl released his first solo album, Edgeland and I was recruited to play bass for the resulting tour.  Karl had been searching for someone who was a bassist but also adept at music technology.  Our mutual friend, the fabulous Dave Spiers from GForce software, recommended me to Karl and we instantly clicked.  Karl had spent his formative music years in Cardiff and to our great surprise we had numerous old friends in common. Karl put together a great small band for the tour including Angie Pollock (Goldfrapp/Peter Gabriel) and Peter Chilvers (Brian Eno). 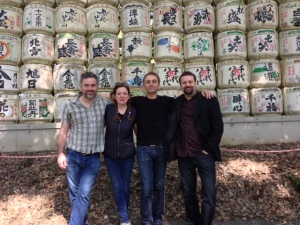 Here is the band (from left to right) me, Angie, Karl and Peter. The photo was taken in Yoyogi park in Tokyo on our first visit. After seeing this photo, we joked that it is my arm resting on Peter’s shoulder!

Karl is an extremely likeable chap.  He is funny, smart and restlessly creative. In fact to accompany his album Edgeland he made a feature length documentary with notable Welsh director Kieran Evans called the Outer Edges which explores the largely unloved areas where a city touches the countryside. These themes of loneliness, isolation, dereliction but ultimately salvation crop in numerous songs on the album lending a cohesive feel to the proceedings. Below is a short clip outlining Karl’s decision to make both the album and the film.

Below is a video from the superb gig we played at London’s Union Chapel.  The song is 8 Ball, an Underworld classic from the Danny Boyle film The Beach.

Karl has had an incredible career which dates back to the late 70’s in said Cardiff. Through the synth pop of Freur to the guitar centric Underworld mk1, Karl went through various musical shifts until him and partner Rick Smith hit on the perfect marriage of techno beats and stream of consciousness lyrics in the early 90’s.

Freur  were an interesting amalgam of influences and although they didn’t have big hits in the UK, they were very popular in Europe especially in Italy where their biggest hit Doot Doot is still often heard. Below is a link to Freur playing Doot Doot live.   for some, this song represents a pinnacle of synth pop as it has become a cult classic over the years.  During this tour with Karl, we resurrected Doot Doot and played it at a few of the venues to much acclaim.  The show in Berlin was especially touching as the noted (and sadly departed) German producer Conny Plank’s son was in the audience and was visibly moved by this performance.  Conny had worked extensively with Freur hence the connection.

I distinctly remember being in a party back in early 1994 when someone put on dubnobasswithmyheadman, Underworld Mk2’s seminal debut.  It was the first time I had heard dance music work with a proper frontman.  previous attempts at this had resulted in novelty fluff like The Shaman’s Ebeneezer Goode. Underworld were a genre defining, zeitgeist surfing phenomena who’s influence is still apparent in many of today’s top dance and electronica acts.  One of the standout tracks from that album was the sly and seductive Dirty Epic.  We revisited this tune on the tour too which was always extremely well received.  Here is the Underworld version:

And here is a very early version of us playing it live at the tiny warm up show we played in Komedia in Brighton.  This was a terrific gig for us as there was a fabulous atmosphere in the audience with plenty of friends.  Some of the UK’s electronica royalty turned out for this including Orbital, Future Sound of London and The Grid.

2012 saw Karl’s biggest endeavour to date as he and partner Rick Smith were the musical directors for the opening ceremony of the London Olympics. Reuniting once again with director Danny Boyle, they set about creating a truly memorable event which blew peoples minds around the globe and defied the British expectation that following on from Beijing’s astonishing ceremony, that ours would be ‘a bit rubbish’. Underworld even composed the music (Caliban’s Dream) for the lighting of the Olympic cauldron! 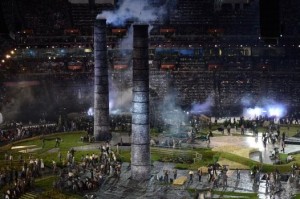 Karl’s album was the next thing he did after being involved with such a magnificent event.  In fact he wrote it in downtime during the punishing rehearsal schedule for the ceremony.  He collaborated with the London based and supremely talented guitarist Leo Abrahams who produced the album. After the album (which I did not play on) was complete, it was then he set about putting the band together for the tour. Karl had been working with Brian Eno, the legendary producer and inventor of ambient music (amongst other accolades) and through him got to know long term Eno collaborator Peter Chilvers, who became the musical director of the band.  As well as being a terrific musician, Peter has also worked with Brian on the generative music apps Bloom, Trope and most recently Scape. 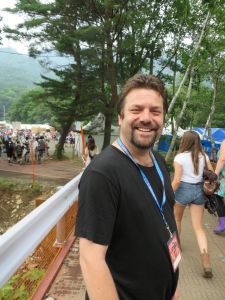 The lineup was complete with the addition of myself and the inimitable Miss Angie Pollock. Angie has had an unbelievable career to date.  She started her professional work with ex Specials front man Terry Hall at the tender age of 17 and then went on to play with (amongst many others) Shakespear’s Sister, Lightning Seeds, Suede’s Brett Anderson, Peter Gabriel and Goldfrapp, who she is currently touring with. 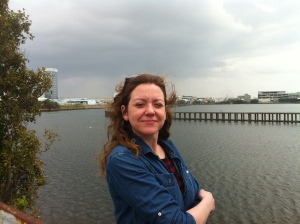 The tour took us around the world and we played some amazing gigs such as Sonar in Barcelona and in fact we headlined at Tokyo’s own Sonar festival too.  Australia was particularly exciting with a sold out gig in Sydney Opera House.

Here I am on the top of the Harbour bridge surveying the scene before the evening’s gig!

The show in Sydney was part of an annual festival they have there called Vivid Sydney in which the harbour becomes a giant canvas for some spectacular lights and lasers.  The Opera House itself is used as a backdrop for projections and it was remarkable how detailed they were and how well the projections mapped to to the sails of the building.  It was thrilling to know that we were to be playing inside that iconic place especially with those glorious projections going on.

Here is the full 2013 projection onto the Opera House

The tour finally wrapped up at the end of July with the biggest and best show at the venerable Fuji Rock festival in Naiba, Japan.  This is the Japanese equivalent to the UK’s Glastonbury and is set in the stunning mountains of Naiba in the central part of Honshu.  We were the second headliners on the Saturday night on the main stage and had the much coveted sunset slot i.e. starting in the light and climaxing in the dark. 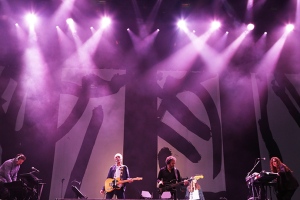 We changed the set around a bit for this show too, taking out some of the slower numbers and adding some more uptempo stuff more suitable for a festival crowd.  Something made this  show extra special for me was that it took place at the tail end of my honeymoon and my new wife was sat in front of the mixing desk, clearly visible to me amongst the tens of thousand Japanese music fans!

Here is a video that my wife Fiona took of the finale, 8 Ball.